Home, the dream of all young people who have no money to buy a land, materials, builders and its maintenance. HOME was s a socio-artistic project which took place in one of the settlements of Elbląd. Its aim was to build a dwelling house “out of nothing” (with found or received materials from the local community and entrepreneurs) between blocks of flats. The team of builders consisted especially of children, teenagers who didn’t have a chance to leave Elbląg for summer holidays. Some adults from the neighborhood appeared as well as other inhabitants of Elbląg, who were willing to work. With time, the prisoners from Elbląg’s Detention joined HOME. Of course the  artist was building the house too. During the time of construction (four months) he lived in a tent in the neighborhood and later in the constructed house.

HOME was a project which assumed an intense, in-depth and long-term contact between the artist and residents of Kopernik settlement – one of estates in Elbląg, considered as an unsafe place. Initially, the project was planned to be held during three summer break months, but extended to almost two years. The starting point for contact and further action was the concept and understanding of the word home. The home is perceived differently by each of us, but at the same time the majority wants to have it. This aspiration is both natural for the human race and socially constructed. Therefore, from the very beginning more important was what was going to arise during the process than what was going to be created materially. The aim was a long-term and adamant animation and cooperation with residents based on their ideas.

The work began with a welcome and getting in touch with the community. For this purpose, some tools from the previous project, “Willing to help” (where the artist offered help to residents in the form of his skills) came in handy.  In practice, a large group of children from the settlement wanted to have a print “Willing to help” on their t-shirts, and with whom the artist later walked around the neighborhood introducing himself and his concept. Sometimes he was able to help someone, but more important was to present himself and gain sympathy. It was time to become familiar with the local rhythm of life, to create first contacts, conversations, continuous play and a little animation activities with the kids, who quickly became the most active social group in the project. The next steps of the action were conversations and meetings about what ‘the home’ is, what does it stand for. With time, the desire of the physical realization of our ideas clarified, which meant building something. From that moment the whole animation was based on construction, designing, researching and inseparable, continuous contact. Originally a shed was built together with furniture for it, later the proper HOME, 25 square meters of settlement’s space.

The HOME was built within three months. A community created around it: kids, teenagers, parents and helpers and just sympathetic people. From that moment the whole project revolved around what this HOME could be for the neighborhood, who wants to work in it, on what basis and why. HOME played a role of a grassroots community centre. The project constantly constituted, forming various activities and initiatives. New allies were found, and hence – the new joint projects based on the universal idea of animation and co-operation with the local community of the settlement, where previously cultural initiatives weren’t so common.

The end of the HOME was associated with more and more frequent lack of presence of the main ringleader of the project, the artist and the lack of permanent adult facility guardian, which was due to deficiency of funds for further action. With time, the desire of maturing youth to self-management the future of the project had to be considered. They obtained, under certain conditions, permanent access to the keys, which was the beginning of the transformation and the big test for the HOME. Unfortunately, the transformation failed and the lack of support for the project from cultural institutions and local government led to a natural regression, and as a result the fall of community centre role of this space. The project ended with the demolition of the HOME initiated by the Department of Green  and Gallery EL.

“Home is a test of strength – both for me and (in a less obvious way) for the society. Whenever I crawled into my sleeping bag on the camping mat – at first in my tent and later in the newly – constructed hexagon – other residents of the district went back to their safe homes and comfy rooms in concrete blocks of flats. During the first few weeks, when my tent was set up next to a makeshift football pitch, just behind the goal (close to garage buildings from which I was allowed to “borrow” electricity), I usually fell asleep with a pepper spray can at hand, and slightly “under the influence” – simply to stop worrying about all possible threats.“
(a fragment of a summary of the project by Parasite)

“In my opinion, what we failed to achieve in Arek’s project (as long as such things can be planned in advance at all) was the balance between artistic action and cultural promotion or rigid work organization. In Arek’s case – at some stage he spend most of his time educating kids. As for me – the pressure related to the physical aspects of HOME construction became the main driving force for a long time. But it was not what we had imagined – the structure, form and durability of the HOME were not to be important. It was supposed to be an ephemeral hut built “out of nothing”, a shelter for an artist for a few months’ time.
Paradoxically, the theory and the reality have brought tangible results (both expected and unexpected). The time spend with children helped win their trust, which translated into interest and understanding of adults. In effect, HOME and its surroundings created a sense of community and attracted local residents identifying with the project – this was indeed our goal.
(…) Arek the Parasite not only managed to integrate the community of the district, but also left a lasting structure – the HOME that now serves as a “mini cultural centre”, which I once tried to prevent. Ironically, this has become the great potential and asset of this place.
(…) I might even say that over the 3 months the Parasite became a fully-fledged citizen of Elbląg, and his devoted fans (mainly children) already await his return with new initiatives.”
(a fragment of a summary of the project by Karina Dzieweczyńska – the curator of Awakening in which HOME was build). 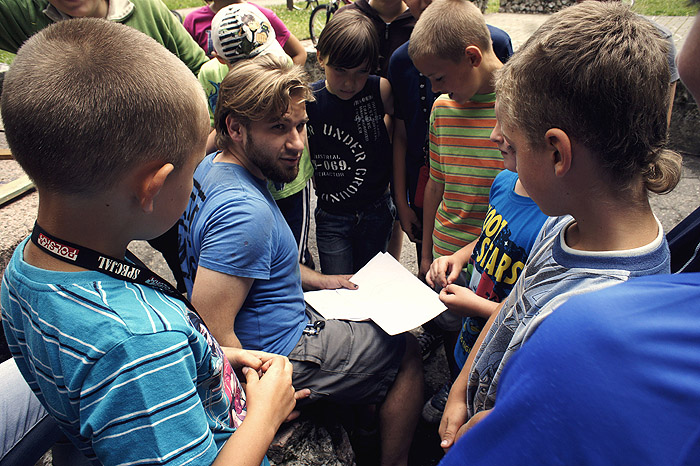 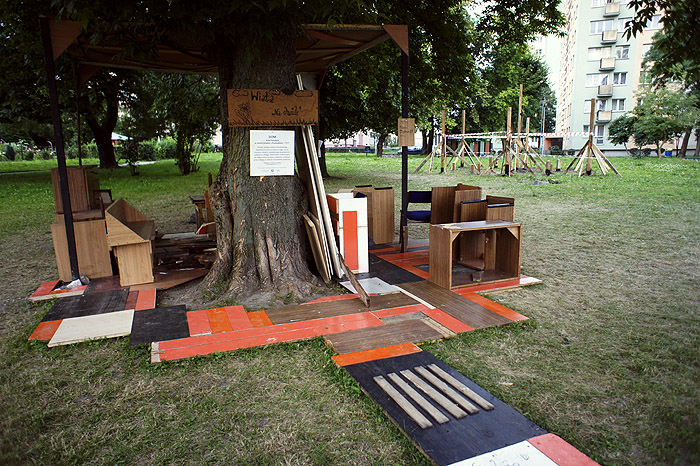 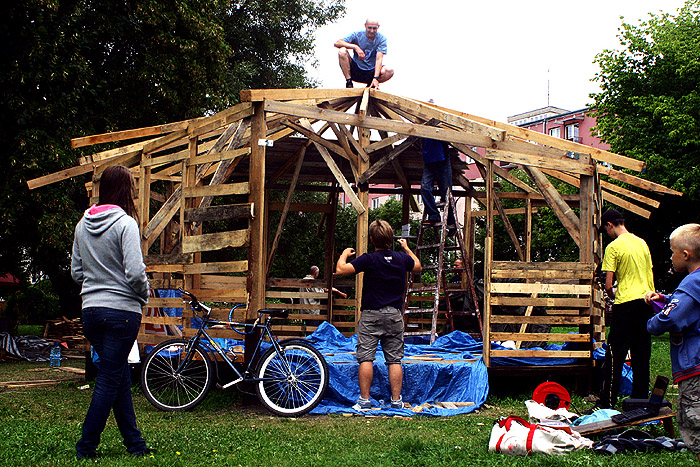 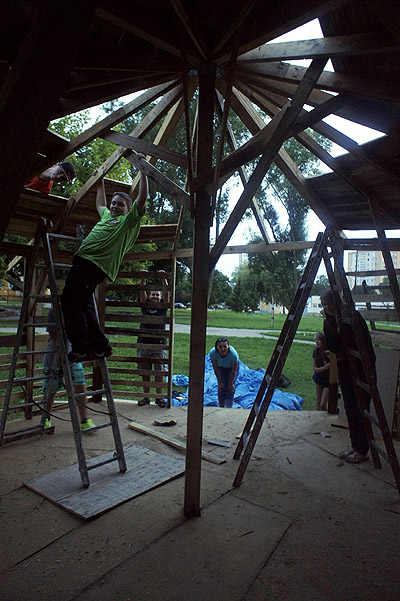 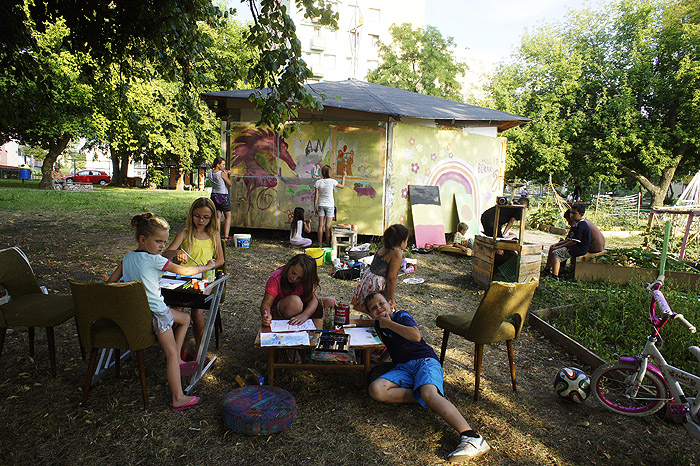 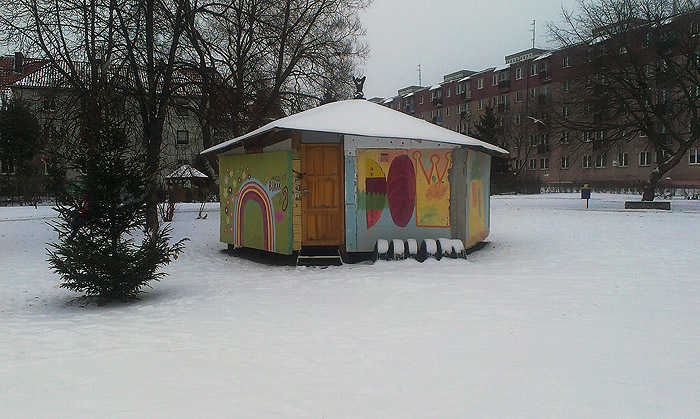