Through participation in a residential programme LOCIS Parasite hired an unemployed, single mother to paint two pictures with a motif of spiral. Canvases were painted at the home of the employee and documented by her closest family: the daughter and the son. 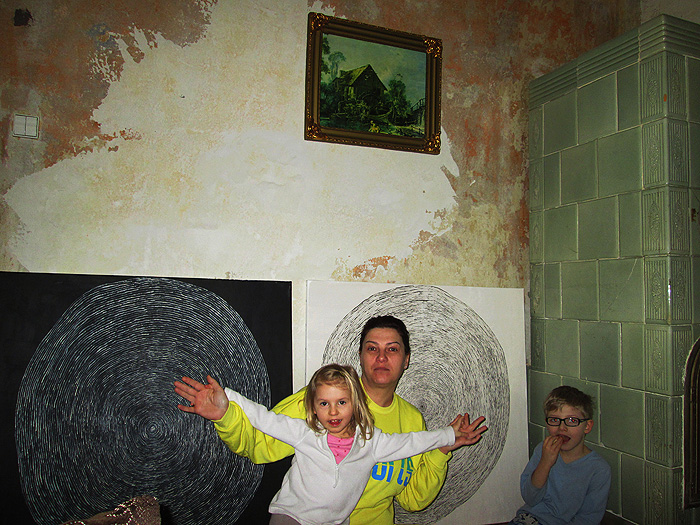 All of the texts below is presented  on documentary boards, which are the element of work.

13.12.2013
The easiest way to describe everything is to use points and dashes so I will do that:
1. All of the events are taking place under LOCIS – residence program in CoCA in Torun (LOCIS is a collaboration between Leitrim County Council Arts Office, Ireland; Centre of Contemporary Art in Torun, Poland; and Residence Botkyrka, Sweden). I’m from Torun therefore the idea of my residency here is very intriguing to me. I quickly decided to focus toward locality.
2. Every artist received 2000 zł for production of his piece + 500 zł for technical cases and installation of his piece (from the begining I wanted to avoid them in order to have more money for the idea):
– the original idea was to hire someone for the duration of the exhibition, that is from 13 December 2013 to 20 February 2014, I didn’t want to spend the money on some materials, I just wanted to give it to someone;
– (the basis of my activity is being a parasite on the art world, and if there is a parasite, there is also a host, so with time I wanted to parallelly operate as well as host, this means: to give direct and unambiguous goods from my art activity, I thought it only makes sense to direct my hosting or society (my older activities such as „Can I help” or „Job offer”));
– at first the money were meant to go to a person from Torun (there would be an advertisement, a recruitment, motivational letters, meetings and the election of one person) who would paint spirals* at the exhibition during opening hours of institution where the audience could observe it (both the spiral and the person painting two large canvases, a black spiral on a white canvas and a white spiral on a black canvas (I’m referring here to the hundredth anniversary of Kazimir Malevich’s Manifesto of Suprematism); unfortunately I felt that something was missing: two 2x2m canvases would cost 760 zł + paints and brushes = 1000 zł … = too much;
– with the passing time the concept turned into making an open competition for any idea to be implemented in Torun, reducing funds for materials (two canvases 1x1m+paints/brushes=350 zł) and more cash for the person or organization selected as a contractor, documentation and photos hanged on the wall around the painted spirals*, spirals painted in the exhibition space; recruitment, motivational letters, descriptions of ideas, any idea: from cultural activities to cash-strapped people with a description of what they need – mostly these were the people I wanted, but it seemed unlikely that the most needy people would notice this announcement and if they would even come it would be too cynical to do a “contest” and selection among those people… and so would end up with people associated with culture, my friends or friends of friends and money would be in the same circuit;
– I decided to focus my attention on someone who really needs the money, I came up with an idea to find a family in need. I figured out that painting in the exhibition space would be too problematic for the family – painting at home will be more comfortable. If they would agree to document the process of painting the spirals* would be perfect, therefore I must buy a cheap camera (camera + memory card = 350 zł); I expected to find boards to hang the documentation in CoCA’s warehouse, I also hoped that the technical department will lend us their tools, and to print the photos on institutional printer, so I won’t bear any costs in those cases. This way I would spend 700 zł on the materials and have 1800 zł for the family; overall i thought it was a right thing to do and I was happy about that idea.
3. I started to think. I need an honest family (someone could easily hide the paints and the canvases (later on sell them at a flea market), steal the camera and say that they don’t have it anymore because of some other family member that’s drinking or some family „friend”). I won’t find that kind of a family myslef, I need some support. I recalled that I have a friend – Monica Szlosek, who’s working in the Family Welfare Centre. I went there and they liked the idea. Ms. Iza Sławińska who works at the area of my interest suggested Wioletta – a single mother with three kids.
4. I went to see Wioletta. She was happy. My proposal was accepted with a great enthusiasm, she agreed to the publication of their image and self-documenting of the process also and even writing notes. During our first meeting while I was talking about spirals *, Wioletta’s son caught the topic so much that he went to his room and tried to draw little spirals on a piece of paper. Eventually Wioletta admitted it would be an interesting activity because the whole family would be working together. We established a deadline for delivering the spirals, but it was in their hands to decide when they want to paint. I will just visit them from time to time to have a cup of tea, talk and copy the photos.
5. The title. I don’t want to title this work deliberately, but here are some suggestions for those who need it: Untitled, Next chapter, Privilege to work, Family spiral.

*spiral is a thread that I’ve taken on one year ago, a cascade of accumulating, non-geometric, accepting mistakes (while painting), very organic and as for spirals – a mesmerizing optical effects; painting spirals isn’t so easy, it’s an arduous work, which requires patience and concentration, but everyone can paint a spiral, each person will have a different dynamic of lines, a different approach to the inevitable defect. Spiral accepts each and every person and in its own way shows its individuality. Spiral will work well visually and always be aesthetic, regardless who’s going to paint it. 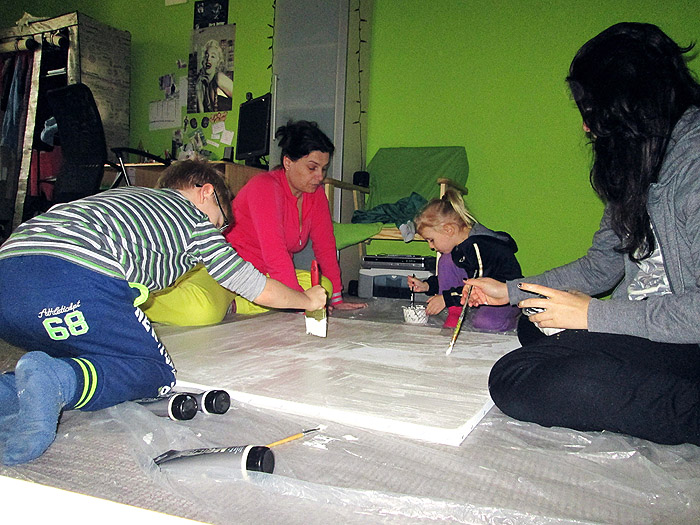 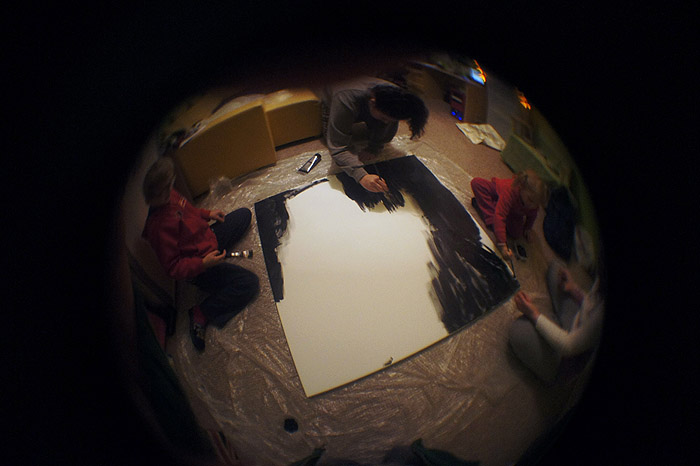 During the first phase, canvases were painted by all members of the family. One can spot the differences in use of the brush between children and the parent (in the art jargon: painterly gesture). We can see it especially on the degree of precision that each of them imposed on himself. 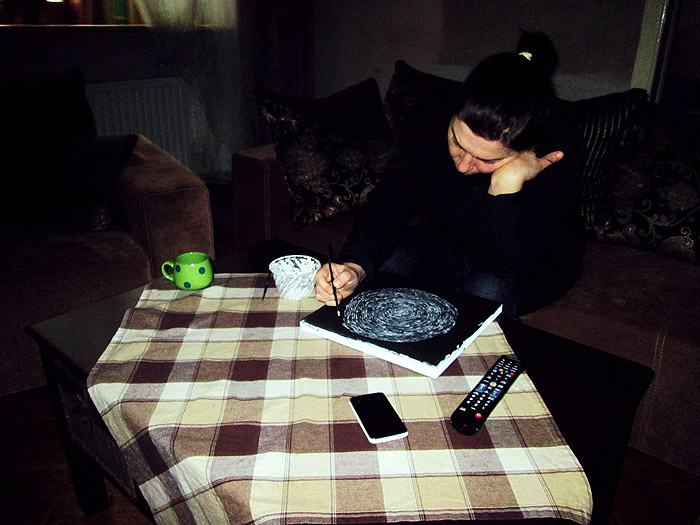 I tried to capture the entire process on camera: conversations at Family Welfare Centre, talks at CoCA, purchase of the materials, meetings at home of Wioletta’s family as well as the photos taken while painting the canvases by Wioletta’s kids: Ola, Tymek and Zosia.
I also added photos showing where I was preparing materials for boards, for instance in the hallway at CoCA.

The intent of the first phase was to capture the specificity of painting spirals before entering the destination canvases by Wioletta and the children. We agreed to start from sketching on smaller canvases. This would increase the confidence and overtake doubts before the larger formats. Children also wanted to paint so I prepared square papers for them.

Wioletta and her kids were scheduled to paint the spirals from 10 December 2013 to 20 February 2014 which is little more than two months.
During that time I was in touch with Wioletta and I used to visit them each time I was in Toruń. I was witnessing the process, I knew if there were any doubts, etc., but we also talked about the general living conditions: the labor market (Wioletta is looking for a job for more than three years, via the Office of Employment or trying to find some temporary jobs) and their financial situation (very often we talked about grants, social support, etc). Let’s face it – single mother with three children, two of them very young, isn’t encouraging for potential employers.
For example. I remember that within two months during the winter season all of the kids became ill.
This is the background process of these paintings. 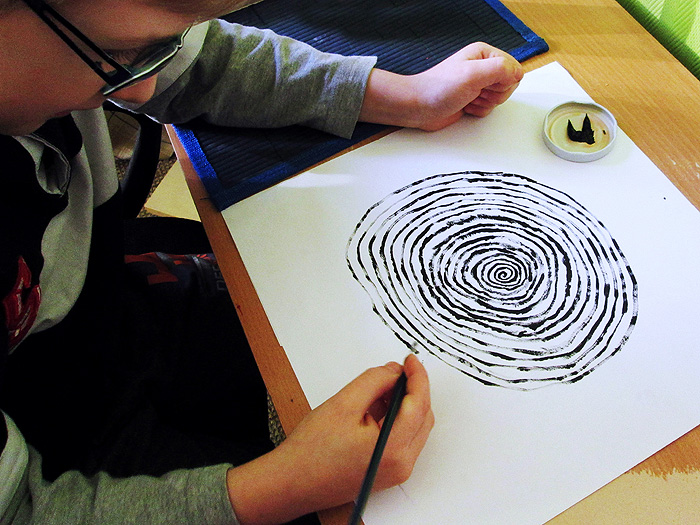 Work plays a huge role in life of single human being and in society as whole. In very simple terms we can say that it meets the three basic and interrelated functions: economic, social and profitable.

The lack of work is far-reaching with consequences.

Wioletta has no job but thankfully she has the family. 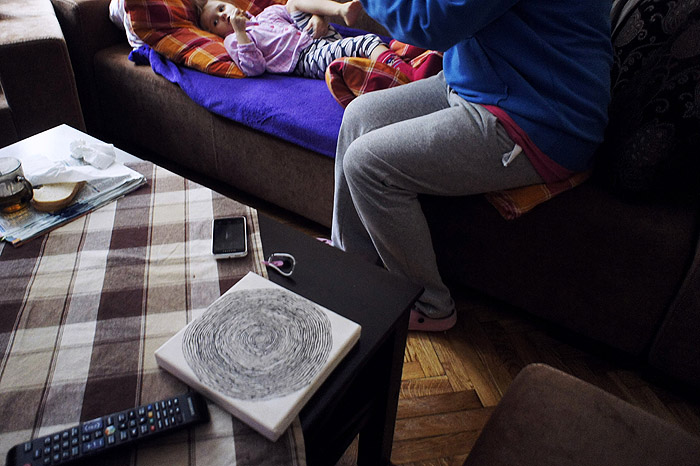 I hope that thanks to my idea and the use of financial capital for implementation of an art-project, I stopped the spiral of unemployment for a moment, I gave a small cash injection and I was able to lift their spirits.

I think that Wioletta and her children fulfilled the work they undertook. 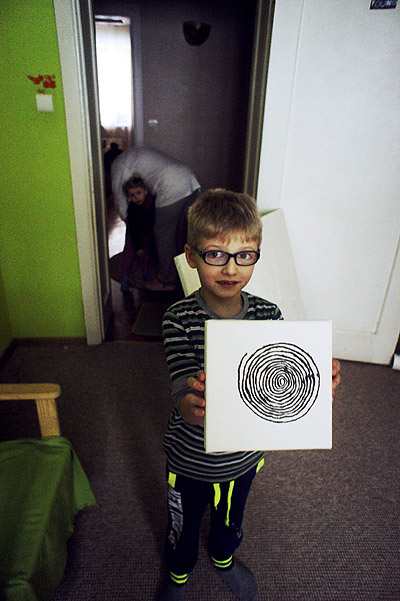 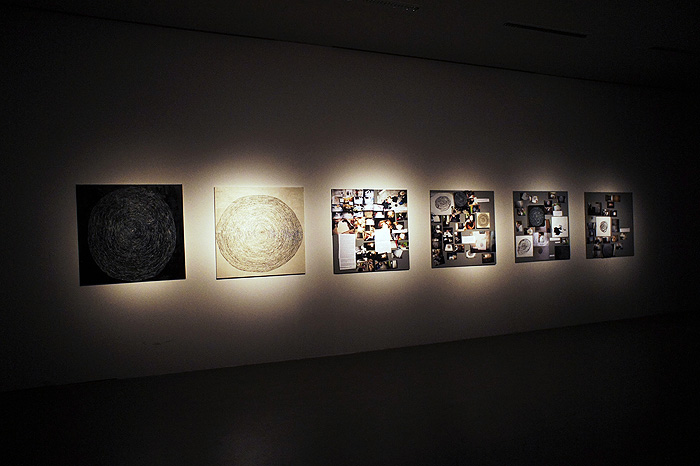 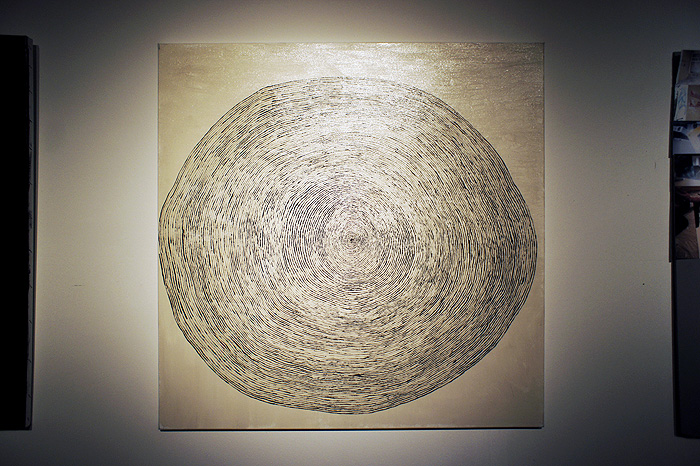 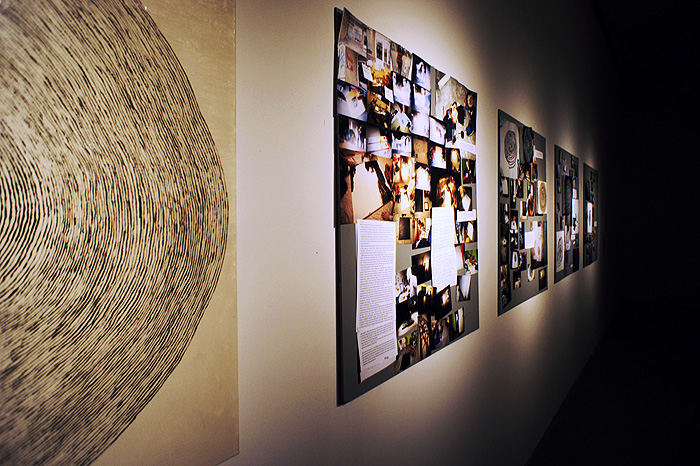 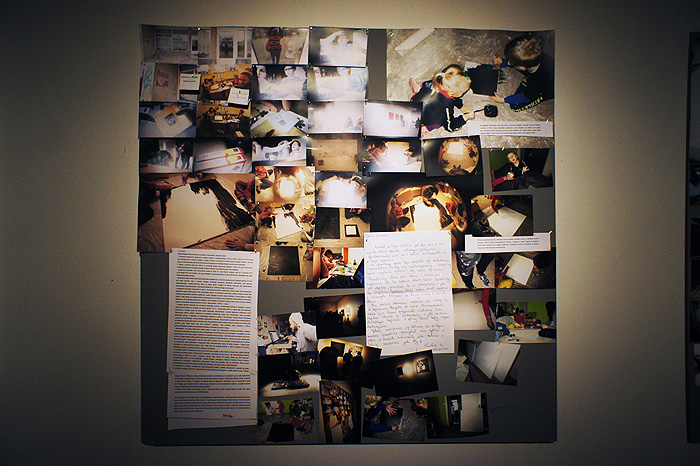 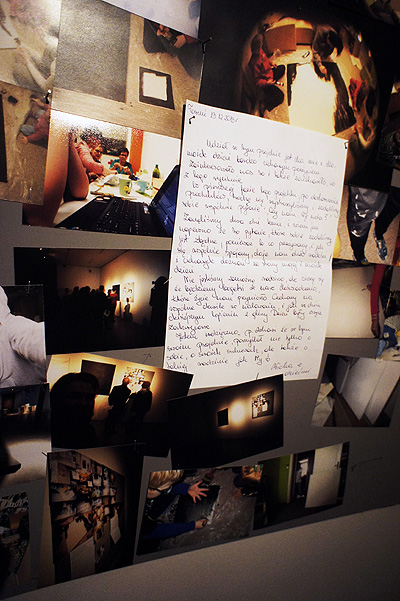 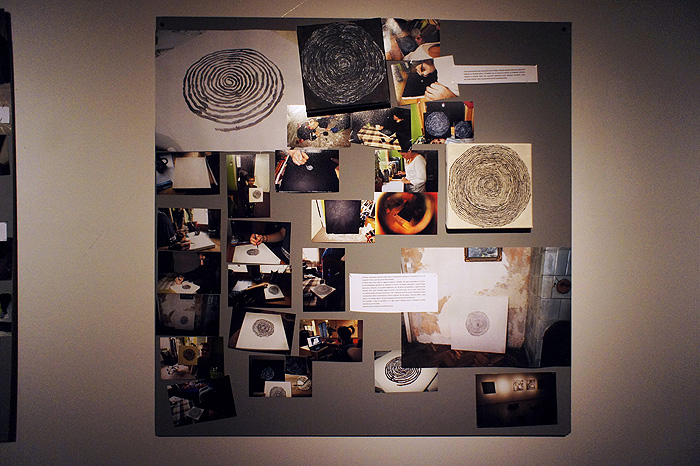 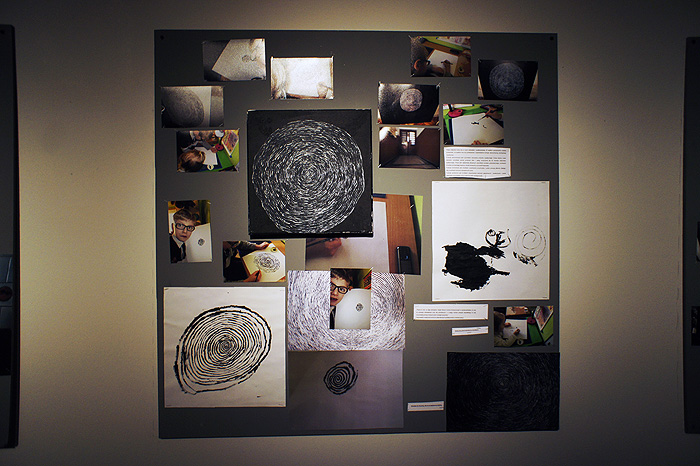 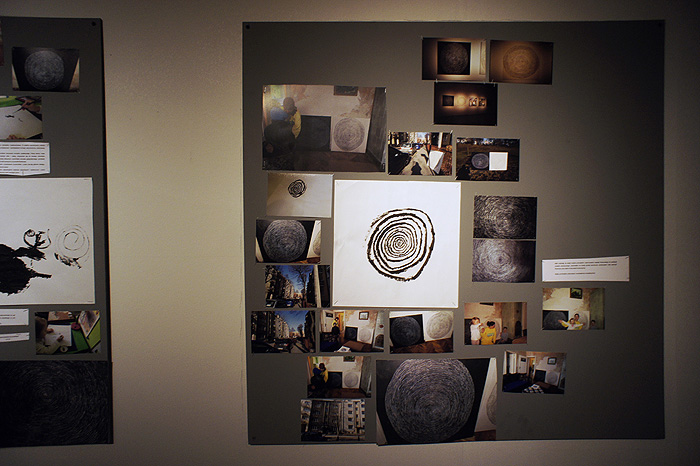